Bitbucket Backup is a backup tool which clones/pulls all your Bitbucket repositories to your local machine.

Development of Bitbucket Backup has stopped, please use SCM Backup instead.

SCM Backup can do everything Bitbucket Backup can, plus:

How does it work?

Bitbucket Backup uses the Bitbucket API to get a list of all your repositories.
Then, it uses Mercurial and/or Git (which need to be installed on your machine if you have at least one repository of the given type) to clone every repository into your local backup folder (or just pull the newest changes if it already is in your local backup folder).
It also checks for each repository, whether it has a wiki (which is a repository itself). If yes, that will be automatically cloned/pulled as well.

Please note that Bitbucket Backup assumes that you have the Mercurial and Git executables in your %PATH% variable.
(depending on the version, Git may come with a git.exe AND a git.cmd - it doesn't matter which one is in the %PATH%, Bitbucket Backup will find both)

To install Bitbucket Backup on your machine, just run the setup.
If you want a "portable" version without installer, there's a .zip download with the binaries as well (starting with version 1.3.2).

When you run Bitbucket Backup the first time, it will ask you for:

After that, Bitbucket Backup will run without user interaction, but you can re-enter your data any time by pressing SPACE on startup.

You need to check the following permissions: 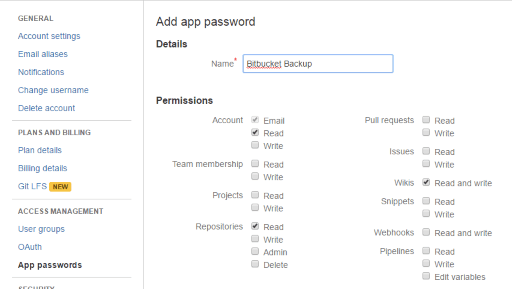 To support the use case where Bitbucket Backup is scheduled to run as a service task, Bitbucket Backup provides an option that you may use to email the output. To take advantage of this, you will need to configure your SMTP settings in the application configuration file. Instructions on how to do this can be found on the SMTP settings MSDN documentation page.

After the application configuration file is updated, run the application with the --email parameter specifying the email address to send the output to, e.g. --email administrator@mycompany.com.

What is actually backed up and how do I restore from that backup?

When you look inside the repository directories, you'll see this:

Your complete history and your source code are in there - you just don't see the actual files.
The repository is backed up without a working directory, because it's not necessary. All the data already exists inside the repository, a second copy of everything in the working directory would just be a waste of space.

It's also possible to create the working directory directly inside the bare repository:

(Note: It seems the Git tools do not like cloning from a bare repository that does not end in the .git extension, so Bitbucket Backup automatically appends it to all Git repositories)

For more background information (and the discussion that led to the creation of this section) see this issue.

To create a release build, just run build.bat or build-setup.bat in the main folder.

Bitbucket Backup makes use of the following open source projects:

Bitbucket Backup is licensed under the MIT License. See License.rtf for details.