Once a year, I need to create a printable map with markers.

The map is for Sindorf trödelt, a website which I built for an annual garage sale in my hometown.

Users can register with their addresses, and I use Google Maps to show them on this map on the website.

The map is not active the whole year, so here’s a picture: 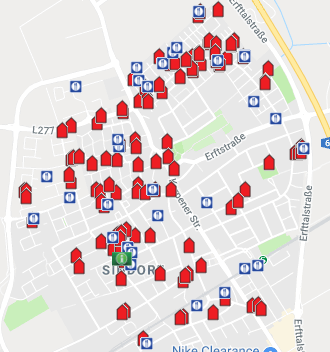 The organizers of the garage sale also need to print flyers and posters with this map, but using the exact same Google Map for this doesn’t make sense, since there’s a limit how many copies you are allowed to print with the free version of Google Maps.

Everybody involved in the garage sale is doing this in their spare time (me included, and I’m sponsoring hosting as well) so there’s simply no budget to pay for a Google Maps license which would allow to print more copies.

So I needed an alternative way to create a map for printing, and I managed to get something to work with OpenLayers and OpenStreetMap:

I based my code on some example code for a OpenLayers map with markers which I found online (I don’t have the link anymore) - it works well, here’s a simplified JSFiddle (right-click on the map and save as image)

But after the first flyers were printed, one problem came up: the font size for the street names was too small, the names weren’t readable anymore.

That was two years ago. Last year I didn’t have time to find a better solution, so they just printed bigger flyers :-)

This year, I finally had time to investigate this.

Running my own tile server

Sounds impressive, doesn’t it?
When you search for things like “how to increase font size in [random web mapping solution]”, you quickly find that:

Running my own tile server sounded scary, so at first I didn’t investigate this, but focused on creating the whole image with different tools.

In the end, I found Maperitive, which has its own scripting language, so it’s possible to write a text file with commands and execute it in Maperitive to create a map image from scratch.

While playing around with this, I found example code which saves the map as tiles (=image files) and uploads them via FTP.

That was my “aha” moment: a tile server is not a complex piece of software, but just a regular web server which serves pre-generated image files over HTTP.

So I just needed some try-and-error, until the tiles looked the way I wanted them to.

That’s it - running this will open Maperitive, which will generate the tiles, save them into the \Tiles subfolder and upload them to the web server.

Here is an example - on the left side an original OpenStreetMap tile, on the right side the same tile generated with Maperitive and my custom ruleset:

Back to the JSFiddle from the beginning:

At the bottom of the <script> block, there’s this:

To change this in order to use my custom tiles, I just needed to use the XYZ source instead of the OpenStreetMap source which I’m using in the JSFiddle.

So it’s simply changing this line: