Until now, the source code of my blog was on Bitbucket, and on each commit the site was build with Jekyll and then deployed via rsync over SSH to my webspace, all with Bitbucket Pipelines.

Like the previous post, where I explained how I set this up with Bitbucket Pipelines, this is the tutorial I wish I had.

What I already had

Most of the “logic” of building and deploying this site already was in two shell scripts. It goes like this:

For a more thorough explanation (and annotated versions of the scripts that explain what each line does), read the first post.

The shell scripts exist so that I can re-use them when switching CI providers…so for the migration to GitHub Actions I didn’t need to change them at all, I just needed to replace the provider-specific settings file which “calls” the scripts.

The existing YAML file for Bitbucket was pretty straightforward:

Step 1: Use the jekyll/builder Docker image to run ci-build.sh and save the build directory as an artifact

Step 2: rsync the artifact from step 1 to the webserver and execute ci-deploy.sh on the server

Both parts are quite short, because Bitbucket Pipelines does a lot of plumbing in the background:

Creating the same with Github Actions

In the end I got it to work - but compared to Bitbucket Pipelines, doing the same steps in GitHub Actions feels “unpolished” (more on that later).

a) Building the Jekyll site

This was pretty straightforward, except that GH Actions doesn’t just let you specify the name of any Docker image which then executes the build…there are only “default” Windows/Linux/Mac virtual machines available.

I didn’t want to script the installation of Jekyll on that machine manually, so I googled for examples with the jekyll/builder Docker image and found the solution in GH Actions’ starter workflows repository:

I just needed to add the call to ci-build.sh and select the correct Jekyll version, so I changed the docker run lines like this:

(note: 3.2.1 is the correct Jekyll version for me, because it matches the portable Jekyll version I’m using locally on my Windows machine, see the explanation in the first post)

This looks slightly more complex than its Bitbucket counterpart…but on the other hand, I didn’t have to come up with this call by myself, I copied & pasted the result in both cases, Bitbucket and GitHub.

b) Connecting via SSH to my server and deploy

This took me a long time and a lot of hair-pulling. I’m no SSH expert, and as mentioned above, Bitbucket Pipelines “protected” me from most of it, especially correctly setting up the key on the build machine.

For GH Actions, there are a lot of actions made by the community that do SSH stuff.

I tried all of them, but couldn’t get anything to work, I always got “Host key verification failed” errors.

Finally I found this solution:

I had tried other similar “manual” solutions that saved the key in a file and executed ssh-keyscan…but the syntax and/or the commands were always slightly different, and this one did finally work for me. Here are my modified steps based on this:

Of course, some variables must be saved in the repo’s secrets (https://github.com/USER/REPO/settings/secrets): 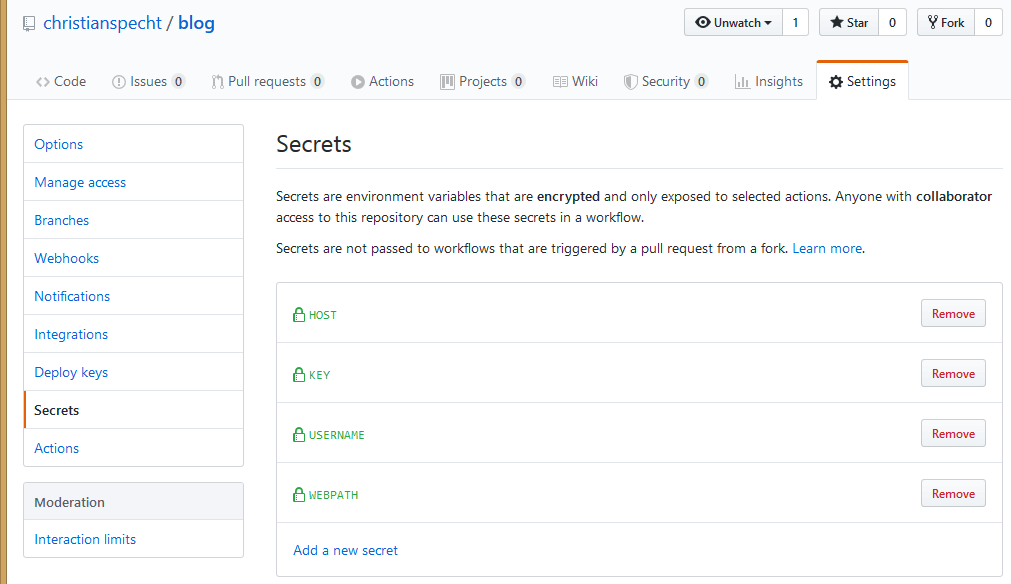 So that was it - here’s the complete working ci.yml:

Bonus: Showing the commit ID / build number in the footer

After everything worked, I decided to add a “Built from commit xyz with build number 123” line in the site’s footer.

From a Jekyll point of view, this is pretty easy. It’s just:

Here’s the commit with those changes - but it didn’t work as-is. The build was successful, but the commit ID in the finished site was empty.

Turns out that the culprit was the fact that I’m running the build inside a Docker container. The actual GitHub Actions “runner” (the virtual Ubuntu machine that runs the whole action) knows about the environment variables, but it doesn’t automatically pass them to the Docker container I’m using (which actually builds the Jekyll site).

The solution was passing the variable directly to ci-build.sh in the line where I’m executing Docker.