This is my first “real” try to write software for an electronic device.
Actually, I already controlled an USB Missile Launcher. But I didn’t really interact much with the hardware then, I just bought a shrink-wrapped device and figured out how to send the right commands to the USB port. So I don’t know if this really counts as “electronics”.

I was already longer interested to do something “real” with electronics/hardware, but I wasn’t sure how to get started.
For example, I looked at the Arduino first (I even pre-ordered the “Arduino in Action” book from Manning). The whole platform looks interesting, but as I have absolutely no electronics/hardware experience at all, fuddling with LEDs, resistors etc. sounds hard/complicated to me.

So I looked further and found alternatives that sounded easier to start with, for a software guy like me:

Yes, I can probably learn more about embedded programming and hardware by using something more “low-level” (like Arduino).
But for now I don’t want/need deep knowledge, I just want to do something cool with hardware.

Then Tinkerforge announced a new starter kit.
Quote from the blog post:

Points of criticism for the old Starter Kit were the missing description of applications, assembly instructions and documentation. We want to counteract these points with a whole series of Starter Kits. The new Starter Kits will always have a specific application as well as instructions for assembly and for the usage of all of our supported programming languages.
The Idea is, that you can finish a whole project with the software and hardware as it is provided by the kit. It will however always be possible to add a whole range of modifications, extensions and improvements, so that the fun of tinkering doesn’t come short.

That sounded exactly like what I needed to get started, so I took advantage of the initial promotional discount and purchased a Weather Station Starter Kit.

Inspired by the projects described on the Tinkerforge site, my planned “end goal” is to do something similar:
I’d like to measure temperature, air pressure etc. on my terrace and display the data somewhere on this site.

But this will come later - in this post, I’ll just assemble the Basic Weather Station and write my first application for it.

There’s not much to say about the actual construction - I blindly followed the instructions.

To get started with the software, I followed the “First steps” tutorial:

This reads the temperature from the Barometer Bricklet and displays it on the LCD Bricklet:

And there it is: 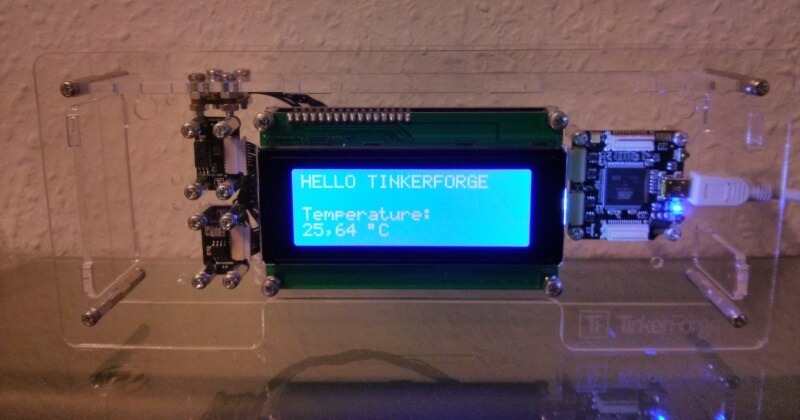 I’m going to put the Weather Station on my terrace and I don’t have Ethernet there, so it needs a Wi-Fi connection.

I didn’t buy the Wi-Fi Master Extension directly with the Weather Station, because it’s not exactly cheap (59,99 €) and I wanted to make sure first that the basic Weather Station (and Tinkerforge in general) works for me.

I will use a Raspberry PI, but I don’t intend to put it into the Weather Station (more about this in the next post), so I bought the (cheaper) USB Power Supply.

The construction was simple. I still had some spare mounting kit parts, so I just mounted the Wi-Fi Extension on top of the Master Brick with four 9mm spacers. That’s all: 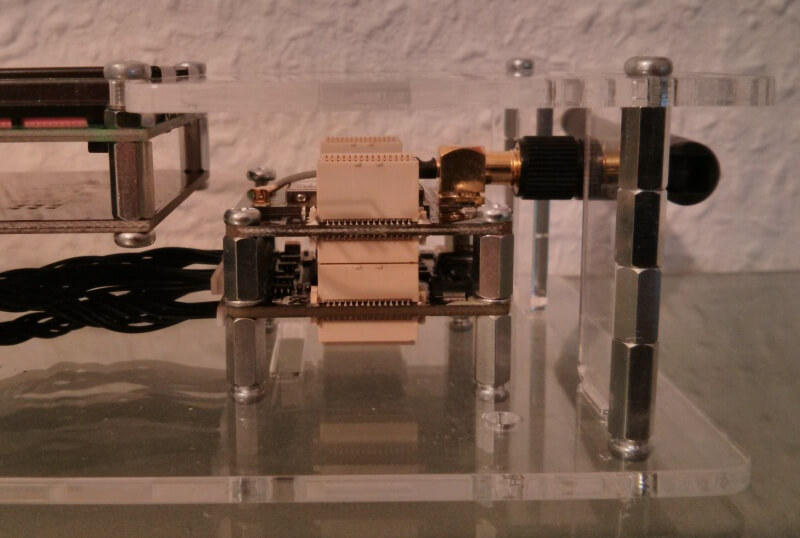 After configuring the Wi-Fi Extension and connecting it to my home network, I tried to get the demo app from above to run again.

Fortunately, there’s not much to change because the extension causes the stack to behave exactly as if it was connected directly via USB.
Quote from the docs:

From the programming perspective this is completely transparent, i.e. all Bricks and Bricklets can be used exactly the same way as if they were connected to your controlling device via USB.

So I only had to change this line in the code:

That’s enough to get it to work: 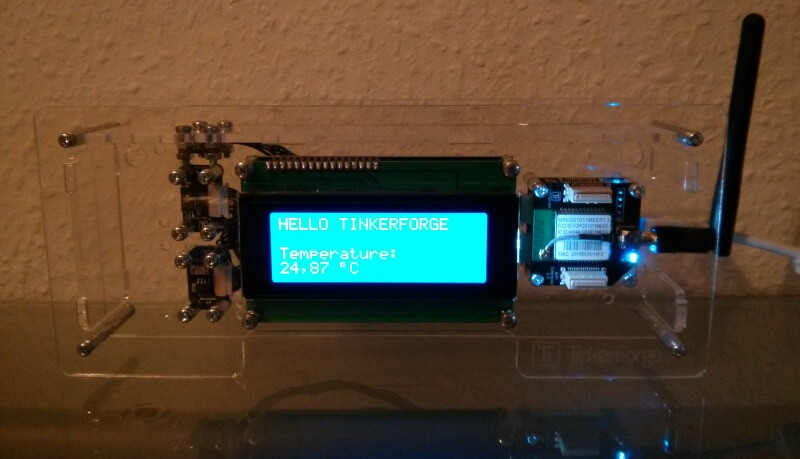